Invasion of the Dorserdierks Duo!

THURSDAY
Cheerio from the Sparkman/Dorserdierks! 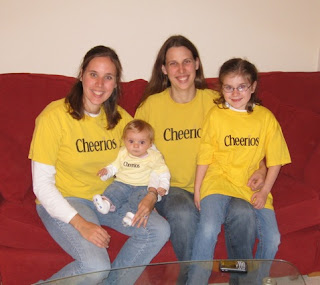 It was a whirlwind weekend with Beth and Sean. They arrived on Thursday on the 4:30 train (after exploring London together). I met them on the station platform and we walked the short difference to St. John's Church. They were just in time for Madison's Rainbow Promise Party (boy was Madison excited to see her Aunt Beffie- she ran across the Rainbow circle and catapulted herself into Aunt Beffie's arms). After Madison said her Rainbow promise, we trucked back to the flat (dragging their luggage behind them) to unpack and settle in for the night.

The Dorserdierks Duo were slotted to stay in Madison's room on a make-shift double bed (Madison's twin bed and the trundle bed pushed together). Moments after their arrival as we were settling in, there was a loud crash from Madison's room. With Lillian tucked hastily under my arm, Beth and I rushed from the master bedroom (where we were checking out the goodies) to see Sean sitting on the broken trundle bed. He announced as we walked into the room, "that was my GENTLE sit too!" Needless to say we had to improvise their sleeping arrangements after that.

That evening we enjoyed Chicken Fajitas and Spicy Rice for dinner and a few games of Skipbo before heading to bed.

FRIDAY
Friday dawned bright and early with the usual morning walk to school. Beth joined Madison and I on the walk from the flat to the school. On the way home we stopped at the village bakery before returning to the flat for a long chat. That afternoon before picking up Madison from school, we wandered the streets of Farncombe and Godalming to see the sites of our home away from home. We picked up Madison at 3pm and rode the train to Guildford to continue our explorations. That evening we went to a local pub in Bramley (one village over) called The Jolly Farmer. Alex, his girlfriend, and Ishan from Rob's office joined us for dinner. We all enjoyed the pub specials and drinks from the bar. Finally, we returned to the flat for some games and then to bed.

SATURDAY
Saturday's weather was typical England weather- dreary skies with spitting rain. But it did not stop us from heading into London for another day of adventures. Since Beth and Sean had seen the major sites of London on Thursday when they arrived, we decided to see the Changing of the Guards at Buckingham Palace and then to explore Covent Gardens.

We road the train from Farncombe to Waterloo Station 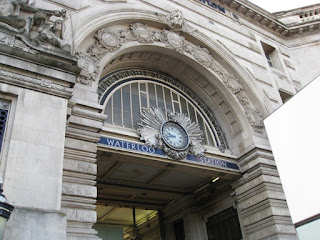 and then took the tube to Buckingham Palace. 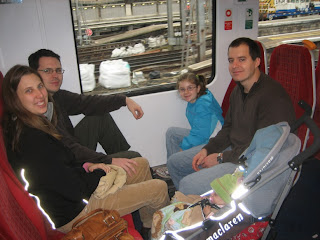 We positioned ourselves across from Buckingham Palace near the Royal Guards Museum. We listened as they warmed up to the very traditional Austin Powers theme song before they marched through the gates toward the Palace for the ceremony. 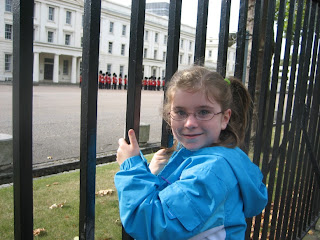 The guards passed directly by us as they marched down the road. 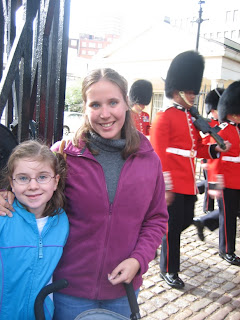 We followed the procession toward the Palace and then continued our walk to the St. James gate to have our picture taken with the guard. 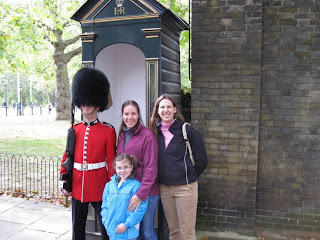 From there we went to Leicester Square to purchase tickets for an evening show at the West End. Beth and Sean were taking me to the theatre for an early birthday present. We had hoped to see the musical Wicked or even Phantom of the Opera or Les Miserable but decided to take our chances and buy our tickets the day of and hope for the best. We got tickets to see Agatha Christie's Mousetrap- the longest running play in London.

After purchasing our tickets we enjoyed lunch the Sparkman way (no it was not McDonald's). We had Pizza Hut- remember free refills. Lillian enjoyed nawing on her first breadstick and the rest of us enjoyed our stuffed crust meat lovers supreme.

We then headed to Covent Gardens to wander the stalls and even did a bit of Christmas shopping.

Dinner was Lamb Kebabs and then we parted ways. Rob and the girls headed to the train station for home and Beth, Sean and I went to the theatre for our show. 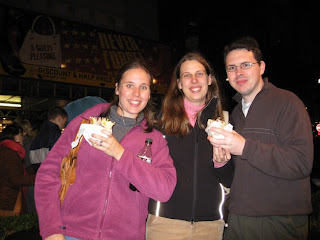 It was an 8 o'clock show at the St. Martin's Theatre. We had second row (B) center stage seats for the performance and it was GREAT! 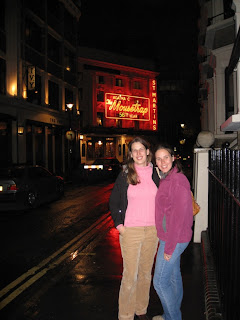 SUNDAY
Sunday it rained and rained. Our clothes never seemed to quite dry out. We decided to visit Hampton Court Palace- home of Henry VIII. We wandered the halls and staterooms of the palace as we listened to our audio guides. 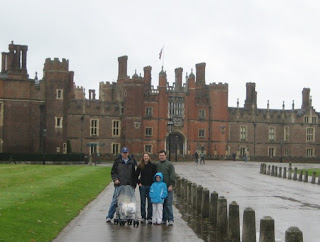 Then finally adventured into the rain to explore the grounds and palace maze. It was great fun! 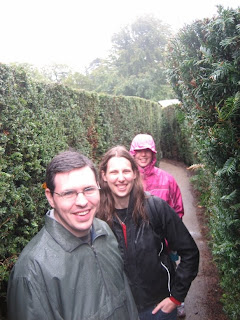 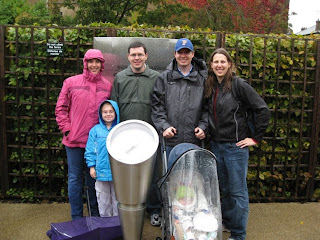 From the palace we rode the train back to Waterloo Station and took the tube to the British Museum. With only an hour before closing, we first saw the Rosetta Stone and then wandered the Egyptian exhibits in the museum. The stone statues and the grid ceiling of the entrance were very impressive. 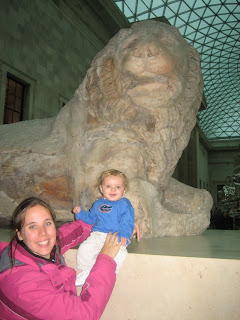 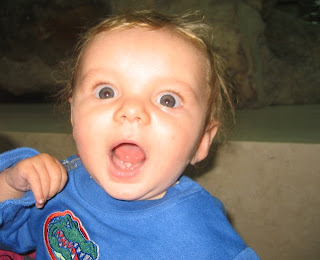 There was just one final stop for us to make that would complete our whirl wind tour of London.
You guessed it.... Kings Cross Station Platform 9 3/4. 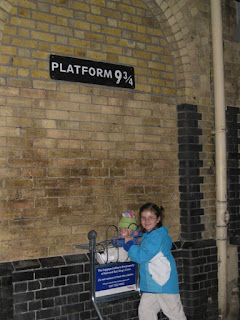 No Hogwarts Express for us today but there was a Southwest Train heading to Farncombe around the same time.

That night we enjoyed Chicken Curry, Rice, and Naan Bread with some tasty Strongbow Cider to drink. Then it was off to bed to get some much needed rest.

MONDAY
We dropped Madison off at school at caught the 10 am train to Salisbury for our visit to Stonehenge. Just an hour and half away with one train change we arrived safely at our destination and hopped on the Stonehenge tour bus (which was waiting right outside the train station) and traveled the 20 minutes to the historic site. Stonehenge was as beautiful as you can image (Dell desktop pictures don't do it justice). We wandered the area, listening to the audio guides about the history and myths of the stones. 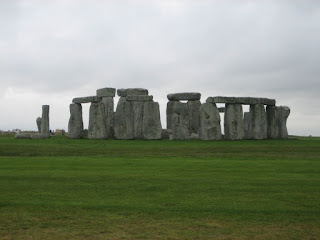 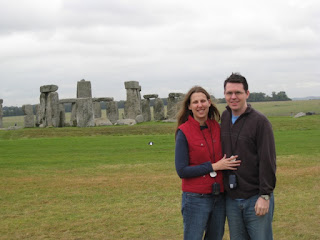 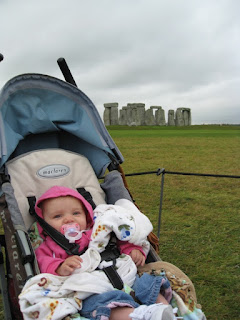 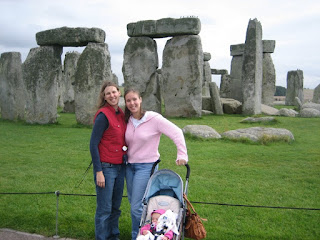 We finished our one hour self-guided tour and boarded the bus back to Salisbury.
In Salisbury we enjoyed lunch at Pizza Express and then toured the streets of Salisbury and finally stopped to visit Salisbury Cathedral.

Salisbury Cathedral is the 4th largest cathedral in all of Europe. Its tallest spire is 404 ft tall. It has one of the 4 surviving Magna Carta's on display in their Chapter House. The cathedral was completed in only 38 years beginning 1220. Again we enjoyed a self guided tour, complete with brochures and pamphlets from the volunteers before returning to the train station. 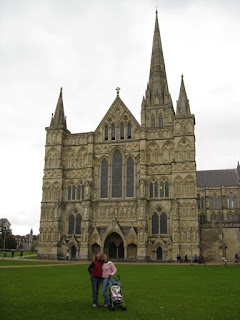 We arrived back in Farncombe a little after six and headed back to the flat for our final evening together. It was a fun filled game night filled with laughter. Then it was off to bed for another early morning.

TUESDAY
Beth walked Madison and I to St. John's Church for Madison's Harvest service. Her school was putting on a service for the Harvest Season and her class was reciting a poem and sing songs for the parents. (Harvest is a week long celebration to show thankfulness for all that we have and to donate food and produce to charities in need). After a tearful goodbye, Beth returned to the flat to pick up Sean for their journey back to the states. As they passed by the church to the train station, they were happy to be able to hear the children singing in the Harvest Service.

It was a great weekend and we were very happy to see our family.
Posted by Sparkman Family at 10/07/2008