SATURDAY:
Beep,beep, beep- the shrill sound of the alarm at 4:32 am Saturday morning.
In the darkness of the early morning, we quickly showered and gathered our luggage to head to the train station- the 5:54 am train was quickly arriving.

It was a 40 minute train to Waterloo Station, then down to the Underground to catch 2 tubes to St. Pancras Station where we would catch the Eurostar train to Paris.
We arrived in plenty of time to catch our train and even had time to enjoy a gourmet breakfast, that's right you guessed it McDonalds.

As we stood in line to board the train, Rob presented Madison with her Eurostar Disney activity pack and asked if she would like to go to Disney. Her response- "Are you joking?" Needless to say, she was quite excited. 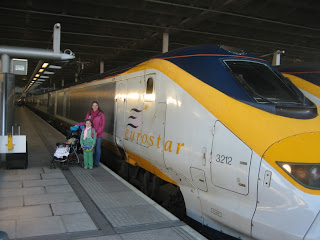 It was a quiet 3 hour ride to Paris. Madison read her reading book for school- no reason to not get a bit of homework done before our holiday. Rob and Lillian napped, that is if you consider closing your eyes a nap. I alternated between helping Madison, working on my own school work, and napping.

It was time for our holiday to begin... 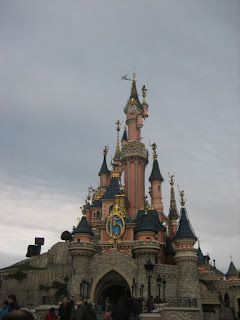 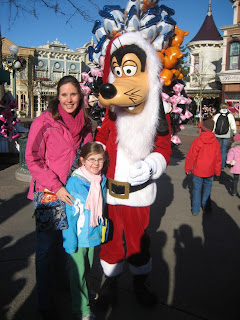 Madison had time for a quick hug with Mickey before heading to the rides. 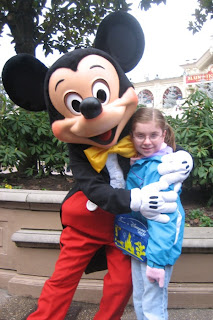 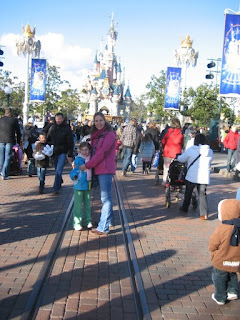 We walked along Main Street to the right toward Discovery Land.
Here we enjoyed rides such as... 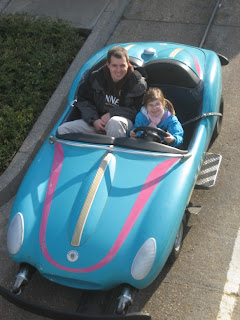 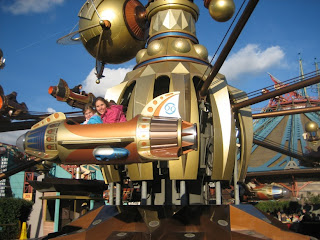 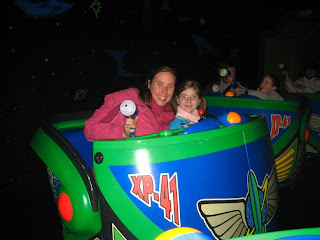 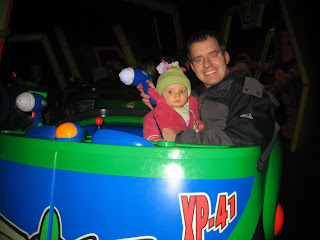 We also enjoyed Star Tours (a simulator ride based on Star Wars) and a stage show of Lion King the musical.

Rob and I both rode Space Mountain (Madison was not tall enough).

One of the great things they have at Disneyland is the BABY SWAP option. One parent and a child (if they are tall enough) stand in line while the other parent and the child who is not tall enough wait at the exit. When the first parent and child get off the ride, the parents swap spots and the child and other parent get to ride again. We were able to ride lots of rides multiple times with this option and it is great because when you kid says "Can we go again" it is easy to say yes.

From Discoveryland to entered the enchanted land of Fantasy-

Equipped with Belle's village and enchanted rose, the ambiance of Fantasyland was incredible. It truly felt like a place outside of reality. 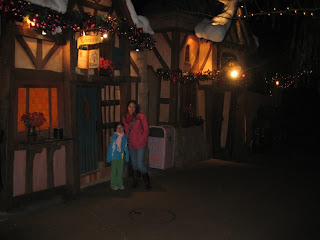 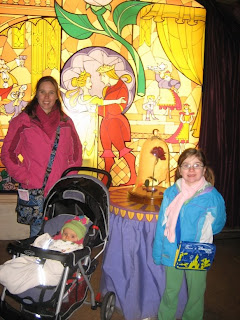 Here we enjoyed the classic Disney rides (not completely classic since the entire dialogue was in French, but close). 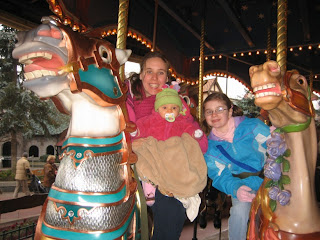 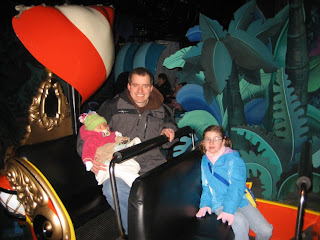 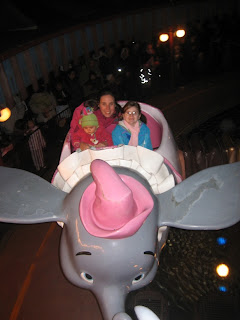 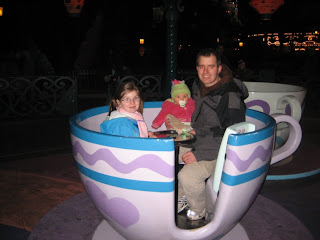 Sadly, It's a Small World was closed for repairs!

Then it was onward with our adventure to Adventureland:

Here we crossed the suspension Bridge to Adventure Island, climbed the tree house of Swiss Family Robinson (Le Cabane des Robinson), walked through Le Passage Enchante d'Aladdin (a story book exhibit of Aladdin) and in honor of Poppy, rode Pirates of the Caribean (much better in Paris and the line was less then 5 minutes).

Our evening came to a close with a family picture near the castle. 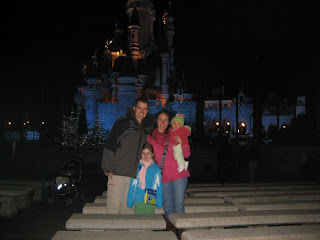 SUNDAY
We returned to the park Sunday morning and immediately head to Adventureland to ride Indiana Jones and the Temple of Peril. This was the only other ride that Madison could not go on, but with a short 5 minute wait both Rob and I enjoyed this fast speed coaster. 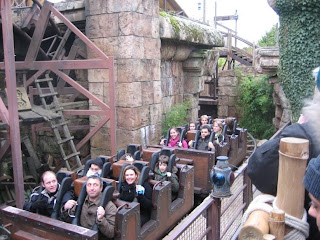 From one coaster to the next, we headed to Frontierland to grab our fast passes for Big Thunder Mountain before experiences the ghostly haunting of Phantom Manor (yes, even at 26 I hate the Haunted Mansion!)

With Frontierland completed, we headed to the train station to head to Paris (see additional blog entry for our adventures in Paris).

After touring Paris, we enjoyed a relaxing evening in the hotel pool. Complete with pirate ship and 3 slides, we all enjoyed the cool water. Madison loved racing from slide to slide while Rob and Lillian enjoyed splashing by the pirate ship. 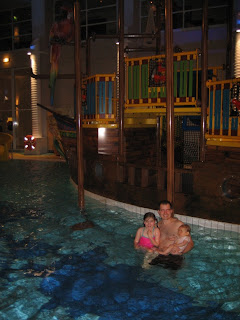 Lillian's favorite part was being tossed in the air and splashed into the water- that is of course until she tossed her "cookies", then it was not so fun. 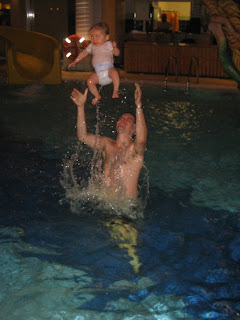 It was a great end to our day's adventures.


MONDAY
We decided to spend the day at the adjacent park of Disney Studios (literally one entrance to the left of Disneyland- very convenient.

We entered the park and strolled through the FRONT LOT (filled with shops and restaurants) to the left and began to explore PRODUCTION COURTYARD.

First ride of the day...
The Twilight Zone Tower of Terror.
Madison and Rob were the first to ride and Madison and I rode again later in the afternoon. My how Madison has grown and changed since we have been in England- she would NEVER have gone on a ride like this before. 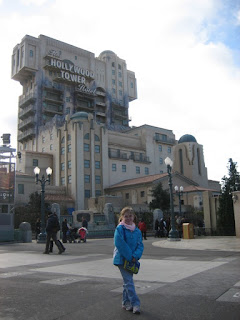 We were just in time to see the CineMagique show before racing to catch the Moteurs-Action Stunt Show Spectacular. 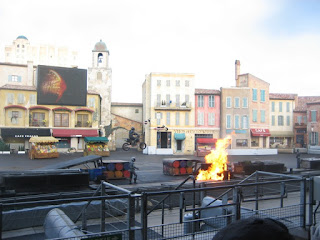 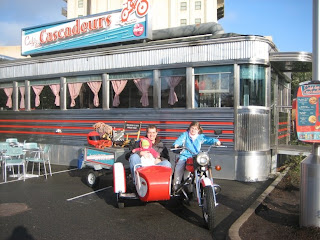 We stopped for a family picture with Minnie and Daisy and then... 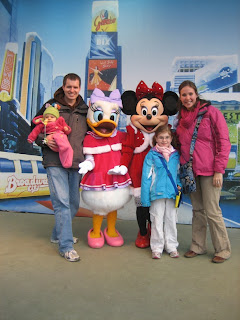 it was back to the BACKLOT for Rock N' Roller Coaster (Amazing!!!!!!!!) and then the Studio Tram Tour Behind the magic.

A quick stop at Monsters Inc, left us in the center of TOON STUDIO to end our day. 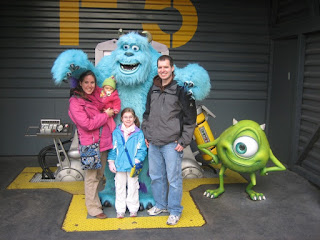 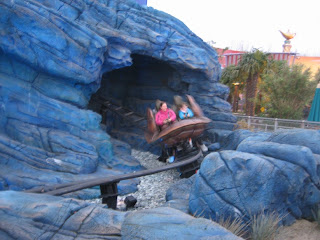 This was by far one of best and most unique rides! Your shell has four seats - two facing forward and two backward and as the ride goes down its first drop, you are treated to a shell that spins as it moves over the track! It made for a very enjoyable ride.

We even saw Remi from Ratatouille and Donald Duck. 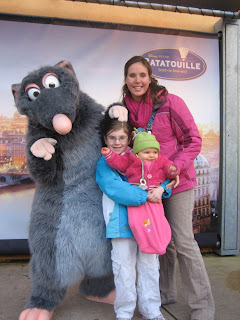 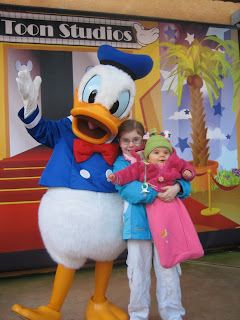 TUESDAY
Our last day at Disney and we decided to spend the day doing SECONDS- that is to say, ride any and all rides that we wanted to a second time.

Just as we entered the park we were greeted again by Mickey! 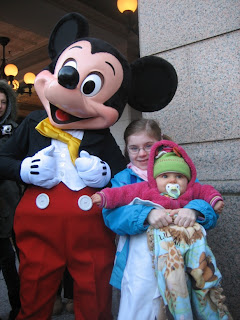 First was Fantasyland to get another chance at Peter Pan, then we went toward Frontierland for another go on Thunder Mountain. The Disney Express stopped just outside of the castle and Madison was able to see her two all time favorites- Peter Pan and King Louis. 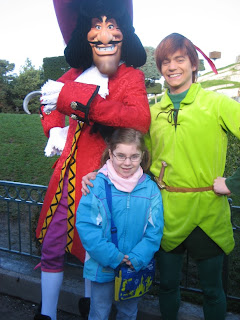 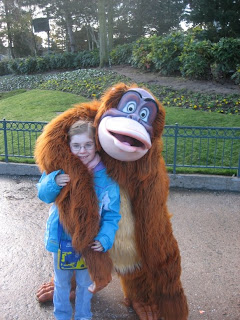 We were able to ride everything we wanted to a second time and some (like Rock N' Roller Coaster a third time - this meant SIX times for Madison).

We waited at the entrance of Main Street to see the parade of lights before hustling to the train station and heading for home.