We left early Tuesday morning (6am) to make the 4 hour drive to Liverpool where Rob was completing a project with Rolls Royce. We decided to go as a family since Rob would have the evenings free to spend with us and it would give the girls and I the opportunity to explore another new place.

Liverpool has been voted the Cultural Capital of England for 2008 (yippee).
But we were not staying in Liverpool. We were staying in Bootle (8 train stops from Liverpool Central).

We settled into the hotel with a picnic lunch packed from home and with Rob off to work, the girls and I took a long nap.

Tuesday evening we all went on the train (not far from our hotel) into Liverpool to explore the sites of the area and to help me plan out what I would do with the girls the following day while Rob was working.

We learned that there are many shops and a few museums to visit in the area (like the Liverpool Cathedral) although like all things in England, everything closes at 6pm. We settled for a gourmet dinner at McDonalds (the other restaurants stopped serving children at 7pm). 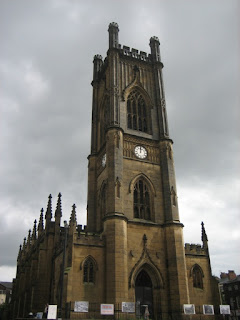 Wednesday was a terribly rainy day and after spending the morning at the hotel and having lunch at KFC with Rob, the girls and I headed out on the train to Liverpool. Much of our day was spent running from shop to shop to avoid getting soaked.
Despite the rain, we made an amazing discovery....

SUPERLAMBANANAS (statues with a lamb's head and banana tail).
** for all of my Chicago relatives and in memory of my Grandma Joan- the European Cows!

All throughout Liverpool there are 118 of these statues to discover. Each statue was purchased and decorated by individuals and will be auctioned off at the end of the month with the proceeds going to various charities.

Madison and I found 16 of the statues during our exploration of the city and enjoyed looking for them. Unlike the other tourists, we did not have a map of where the statues were located and thus the ones that we found were by sheer accident. The statues were displayed everyone (in the malls, along the sidewalks, in window displays and restaurants).

While we had hoped to find more (Madison's goal was 29) it was great to simply come across one of them as we walked along, rather then trying to follow a dictated path.

Here are the one's we found (names below each picture). 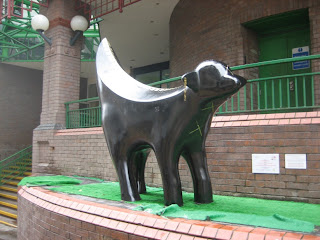 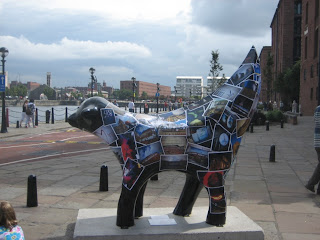 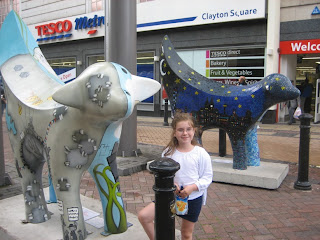 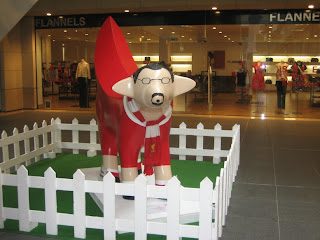 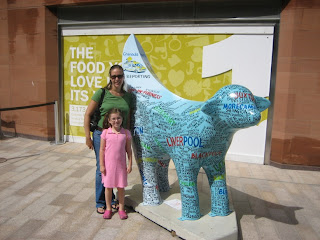 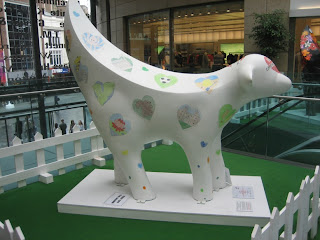 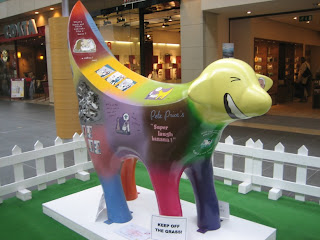 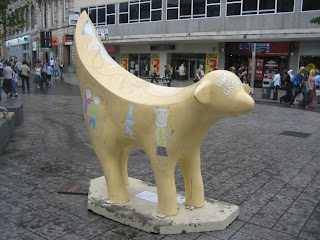 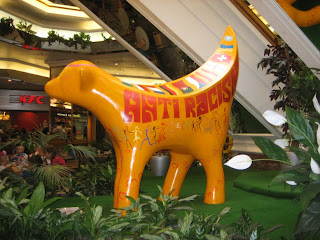 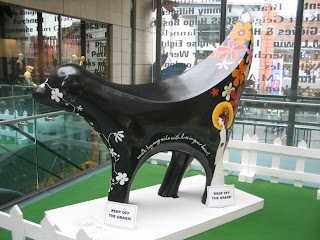 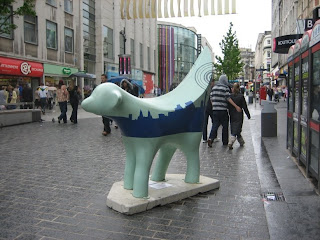 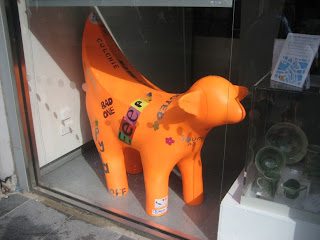 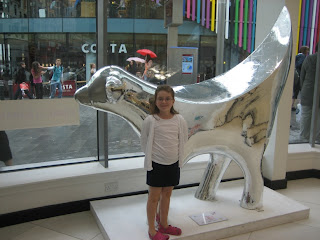 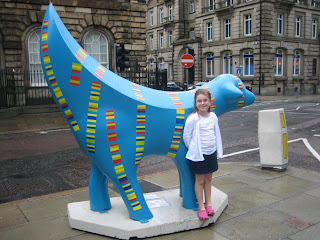 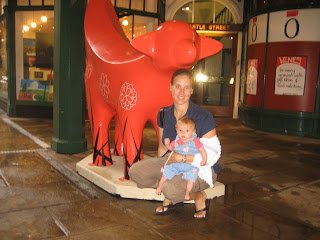 
Wednesday evening we visited Crosby Coastal Park to see Antony Gormley's exhibit "Another Place". One of Rob's co-workers suggested we go there - we did not know what to expect. When we reached the beach, we were surprised to see what looked like people standing still scattered along the beach - even very far off shore. Had it been high tide, I would have been in horror of the thought of these "people" drowning! We soon discovered that the people were statues.

Some details: this exhibit consists of 100 cast-iron statues of life size figures (the artist's own body). Each statue weighs 1300 pounds. The statues are displayed along 2 miles of the foreshore, stretching over half mile out to sea. Each statue is shown at different stages of rising out of the sand, all of them looking out to sea, staring at the horizon in silent expectation. At particularly high tides all the figures will be completely submerged under water. 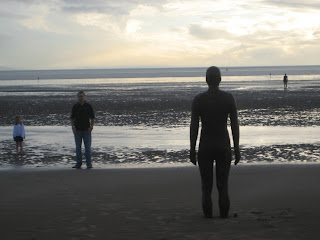 Seeing this exhibit at the sunset on the horizon was awe-inspiring. It was a truly beautiful site.

Thursday morning we packed to go home and made one final train trip into Liverpool to visit Albert Dock. 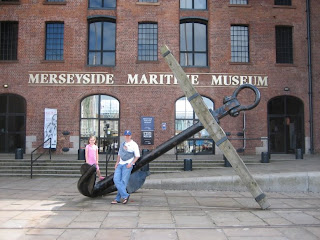 First we went to the Merseyside Maritime Museum (Liverpool is a well known shipping area - many large ships such as the Titanic, Lusitania, and several others-were either built, funded, or launched from Liverpool). The museum was filled with exhibits of the different boats and the changes that have occurred in the engines and structures of the ships. This was definitely more of a Rob thing then for the girls. Each of us found something of interest.

Albert Dock is also the location of the famous Beatle's museum, but we couldn't be bothered.

The drive home took a bit longer then we expected due mostly to traffic, a food stop, and trying to find an open petrol station. But we did make it home safe and sound. There was a terrible rainstorm as we were driving but as we stopped for dinner we looked to the sky to see a beautiful rainbow. God is good!! 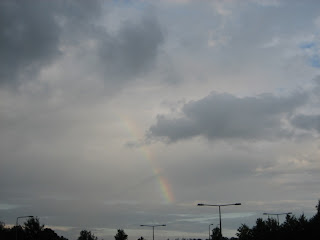 I can say that it was fun to visit Liverpool and we definitely enjoyed the sites we did see but it is not high on my list of places to return.
Posted by Sparkman Family at 8/08/2008